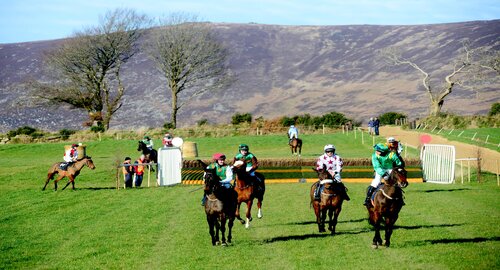 The Ballinagore Harriers Hunt club is located in Co. Wexford.  The club was established in 2014 and is fully affiliated and has been growing in membership since its establishment.

This is our first ever point to point on a newly established track.  The track is located in Kiltealy.

The point-to-point is held on the lands of handler Matthew Flynn O’Connor.

The course itself is a left handed track and the runners will go downhill for a furlong and a half before it levels out. There is a gentle rise to the line.

In all it is a mile around on each circuit with fives fences. Three of the fences are jumped in the home straight, and all of them come before the winning post. There is another fence at top of the course and the fifth fence is in the back straight.

Combined with our free parking, we are lucky to have a clear viewing track that allows racegoers to get up close to the action, often from the comfort of their car, should they wish to bring their own picnic for the family.

There is a betting ring located close to the parade ring, allowing racegoers to throw an eye over the runners before deciding on what horse warrants a wager. Off-course betting on Irish and UK race meetings is available.

A day at Ballycrystal point-to-point is a perfect family day out, bring a picnic and enjoy the fantastic racing on offer.

On the day our on site catering facility will be sell a range of fast food including chips, burgers and sausages.

There will a range of hot and cold drinks available from our onsite catering providers.

Whether it is something to quench your thirst or a nice cuppa to keep you warm!

IS THERE A DRESS CODE FOR POINT-TO-POINTS?

No, we do not have a dress for our point-to-point, we suggest you dress appropiately for the Irish weather!

CAN I BRING MY DOG?

Yes, please feel free to bring your dog. Just ensure to keep it on a lead at all times.

CAN I BRING MY OWN FOOD?

Yes, of course ! Our point-to-point is the perfect spot for a picnic.

IS THERE KID'S ENTERTAINMENT ON THE DAY?

We are lucky enough to have wide-open space suitable for children to play in a safe environment.

DO YOU HAVE AN ATM ON-COURSE?

No, there is not an ATM on course. Please ensure to stop off on the way to pick up some cash.

Point-to-pointing is the perfect day out for all the family in the Irish countryside and where you will get to witness the future stars of the racing industry make their introduction into competitive racing.

For Certified Hunters aged 5 years old, Mares only, maidens at starting, the property of subscribers to any Hunt in Ireland.

FEUILLE DE LUNE put up a brave effort from the front on her debut at Borris House before Christmas when she was only headed at the penultimate obstacle. With her stable having won a similar contest at Tinahely last Sunday, she should be capable of following up here. Her stablemate also made her debut at Borris House when finishing a respectable fourth, and there may not be a lot separating her and Jiggy With It who was third at Ballingarry in June, as the dangers.


For Certified Hunters aged 5 years old, Geldings only, maidens at starting, the property of subscribers to any Hunt in Ireland.

SUNSET WEST was one of two horses that pulled a distance clear of their rivals at Boulta in November, and whilst he came up a length short against the most experienced French Light, that would look to be the standout piece of form coming into this and he would be hard to oppose if reproducing that. The likely danger could come from Get Your Own, who although no match for the impressive Clondaw Bertie at Dromahane over Christmas, ran a respectable race on his debut nonetheless.


For Certified Hunters aged 5 years old and upwards, the property of subscribers to any Hunt in Ireland, which have not won a race under the Rules of Racing or Steeplechasing in any
Country and not more than two Point to Point Steeplechases of any description.
No Penalties. Mares allowed 5lbs.

MT LEINSTER GOLD will be in receipt of the valuable 5lb mares allowance which could prove too much for her rivals to concede to her, as she won impressively at Dawstown last May following on from an eye-catching introduction at Monksgrange before that. She can make a winning return to action in this. Alka Lion should find things easier in this having pulled-up in open company on his seasonal re-appearance at Mainstown. He ran a number of respectable races last spring and is proven in winners company, whilst Beatthebullet will need to bounce back from a disappointing run at Aghabullogue last Sunday.


For Certified Hunters aged 6 years old and upwards, Mares only, maidens at starting, the property of subscribers to any Hunt in Ireland.

MIDWAY TO GETAWAY chased home Immortality on her debut at Moig South back in November in what was an encouraging effort which could give her the edge in this. Lady Violet could be set for her second run within a week having finished fourth at Tinahely last Sunday, and she did show some signs of coming back to her Loughrea second in that effort, whilst Maybe Its Time managed to get among the placings at Tinahely in November and may be more at home in this grade having pulled up in a competitive race at Borris House most recently.


For Certified Hunters aged 6 years old and upwards, Geldings only, maidens at starting, the property of subscribers to any Hunt in Ireland.

CHOCTAW BRAVE has steadily progressed with each outing this season, culminating in a close fourth placing at Lingstown back in November. With the runner-up from that race since franking the form, he could be the one to side with in this contest. The New Kid is the obvious danger following two respectable runs at Ballindenisk, and having finished second on his penultimate start, he is entitled to win a race like this, whilst Milanford would have to enter the reckoning on his Lingstown run if bouncing back from a disappointing run at Borris House.

THE SILENT TRAINER managed to get among the placings in a four-year-old maiden on his debut at Mainstown, and whilst he could not quite follow it up at Dromahane over Christmas, he still ran a solid race and should be a leading contender with the switch to Confined company. Stable mates Texas Gold and Pasvolsky are others that have made the frame in four-year-old company ensuring that they have to enter the equation for this, as does Choctaw Brave and Oscar Elite.